How Exercise Became My Way Back to Health 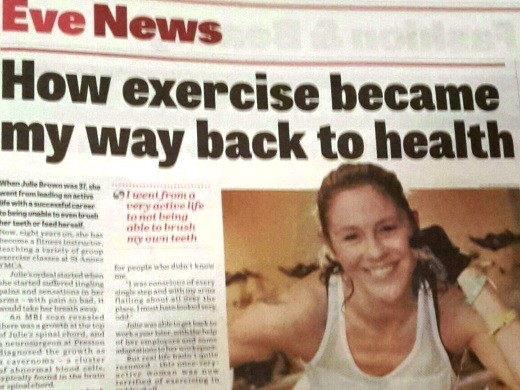 8 years ago at the age of 37, Julie Brown (now 45) of St Annes was suffering with tingling pains and sensations through her arms. The sharp pains she recalls would take her breath away.

An MRI scan revealed there was a growth at the top of Julie’s spinal chord and she was referred to a Neurosurgeon at Preston who diagnosed the growth as a Cavernoma, which is a cluster of abnormal blood vessels typically found in the brain or spinal chord. A cavernoma looks a little like a blackberry.

The Cavernoma was entwined in her central nervous system and Julie was given the news that she had two options. To have the Cavernoma removed and manage the risks associated with operating in that area of spinal chord or monitor the growth with the risk that it could bleed, leading to the possibility of paralysis or even death.

With two teenage sons and a step daughter, alongside her successful career as an I.T. Security Consultant, she had no option but to go through with the operation.

Julie said: “Looking back this was the point where my whole life was about to completely change. It changed who I was and gave me a different outlook and I realised what really matters.”

Immediately after the operation, life did get harder as the risks associated with Julie’s surgery manifested. The operation itself was successful however she lost nerve paths through both arms which left her with no feeling and no control over her arms at all. Areas of her lower legs and abdomen were also affected.

“Over night I went from leading a very active life, travelling, socializing, keeping fit to not being able to brush my own teeth or feed myself.”

Julie began intensive physiotherapy, treated by specialist physiotherapists who began to help her re-build her brain to hand functions.

“Once home from hospital I used to make myself walk around the block and it must have been such a funny sight for people who didn’t know me. I was conscious of every single step and with my arms flailing about all over the place, I must have looked very odd!” she laughs.

Julie was able to get back to work a year later with the help of her employers and some adaptations to her workspace. But real life hadn’t quite resumed as this once incredibly active young lady, was now terrified by the thought of exercising in public at all.

“I had ventured to a local hotel pool to swim and to help start strengthen my arms, but I could only get in when I was sure I would be one of the only people in there! My body confidence was gone.”

Then another year on, Julie bumped into YMCA instructors Jackie Daly and Sue Mann who encouraged her to ‘come back and try a bit of Zumba’ at the centre on St Albans Rd, St Annes.

She recalled: “I remember worrying about if my body would actually work and standing at the back of the class making movements I couldn’t necessarily control. That was four years ago and I haven’t looked back.”

From here Julie’s confidence kept on growing and her control and co-ordination improving. She started to push herself a little bit more, going for a run, trying a different class and then in 2013 she really put her mettle to the test by completing a 10 mile charity endurance event organized by the Parachute Regiment.

In the exhilaration of the moment and with the adrenaline pumping she committed to participating in the event again in 2014, however this second event would try and take her out of the game again too.

“Half way through the course I slipped and broke bones in my lower left arm. I needed surgery to fix it and the inability to use my arm again for a short time made me think that this was possibly a sign I needed to slow down, however it pushed me to also think what are you gonna do now?”

Julie started to think about aiming for something that would give her real focus.

“I absolutely loved my job, but my passion had become about the one thing that had pulled me back together and truly tested me along the way.

“I realised that I wanted to help motivate and inspire others just like the way Sue and Jackie had helped me. They threw me a life line and helped me re-build my confidence.”

Julie enrolled on the YMCA Fit Level 2 Exercise to Music course in April 2015. Qualifying in October 2015, she is already fulfilling her goal and has become the instructor herself, teaching spinning, High Intensity Interval Training and body conditioning at YMCA St Annes.

She said: “I am proud of myself but it’s not really about that. My life was forced to change and for the better and if I can give the thankfulness and positivity I feel back and help others feel a sense of wellbeing and personal achievement, then the journey has been well worth it.”

“Don’t ask me to tie your laces though or fasten any buttons… I’m hopeless!”