These Girls Do... YMCA Members on Overcoming their Fears 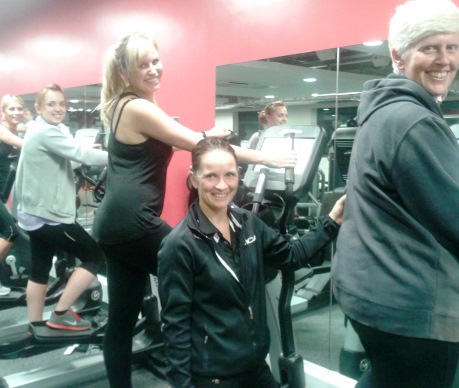 Sport England recently launched their ‘This Girl Can’ campaign to celebrate those who already lead active lifestyles and to empower other women to join them.

The campaign is backed up by Sport England research which found 75% of women aged 14 – 40 years old want to be more active but that there are common reasons why women are stopping themselves from exercising.

Reasons included not wanting to look sweaty in front of others, believing they’re not fit enough or good enough at an activity or that they don’t have the right equipment. Some women also said they were worried about coming across as too masculine.

The main overarching reason stopping women from participating in exercise and sports was the fear of being judged.

So we were approached by Blackpool Gazette Reporter Emma Harris to ask a group of our female YMCA members and YMCA Instructor Claire Nutton at the new state-of-the-art gym in YMCA Poulton for their thoughts on the research, how they felt before joining YMCA, their perceptions of gyms and for their advice on how to overcome the barriers.

Our willing ‘role-models’ were Samantha Evans, 26 of Fleetwood, Amanda Hollingworth, 44 of Poulton, Louise Dickinson, 46 of Cleveleys and Georgia Hindle, 23 of Poulton.

Here’s what they said…

The general feeling among the ladies was that to begin with they were all initially apprehensive and nervous about going into the gym or swimming pool environment.

They said it was the not knowing what to expect and also having preconceptions that people who go to gyms are already fit, toned and immaculate.

But once they all made that first step they realised there was really nothing to be worried about.

Samantha Evans, 26 of Fleetwood has been a member of YMCA and using YMCA gyms for 3 years now she said: “Yes I was a little apprehensive about going into a gym for the first time but I wanted to change my lifestyle and get fitter so I had to get over it. I found it a little hard for the first couple of times but that goes when you realise there’s nothing to worry about.”

Amanda Hollingworth, 44 of Poulton has been a member of the gyms in Poulton and Thornton for over 20 years. She said: “I’ve always come to the gym on my own then you just start chatting to people, the instructors and other gym users which helps make you feel more comfortable and its more of a social experience too.”

Mum of two Louise Dickinson, 46 of Cleveleys said for her the first step to losing weight was getting in the pool. She said: “I needed to lose weight so started off swimming. I was worried about putting a swimming costume on but once you’re in the pool you forget and remember everyone else is doing their own thing too, they’re not interested in what you’re doing.”

Louise went from swimming, to gym and she now thoroughly enjoys the classes and group workouts as they are very sociable.

Georgia Hindle, 23 of Poulton joined YMCA in July on a summer mission to tone up. She said: “I was unsure about what to do in the gym at first so just started on the treadmills. Then I got a personal programme off my fitness instructor and my short term summer mission has turned into a Christmas mission! I feel nice about myself and I’ve already bought my Christmas party dress.”

Georgia added: “You think gyms are just for slim people and they’re not.”

Louise’s advice is: “Just come in and take a look around. You’ll see people of all ages and abilities who are just as unfit, they were just as subconscious but you’ve just got to do it, life’s to short and you will feel good once you try it.”

Claire Nutton, YMCA Fitness Manager said: “We’re here to make sure everyone feels welcome all the time and does not feel nervous about using the gym. Some of our new equipment is so easy to use with the ability to log in to the cardio machines with your mobile if you want to, so you don’t have to touch a button, it’s just so easy.”

Claire added: “We’re also very focused on making sure everyone has their own personalised fitness programme to follow, so within weeks your confidence grows naturally, you get to know the instructors and other members and feel at ease.”

So there really is nothing to fear you’ve just got to do it! And as a wise philosopher said: “There is no illusion greater than fear.” ― Lao Tzu.

Take steps towards lifestyle change and try YMCA for free with our One Day Free Membership Voucher.