Fiona's a Winner in More Ways than 1 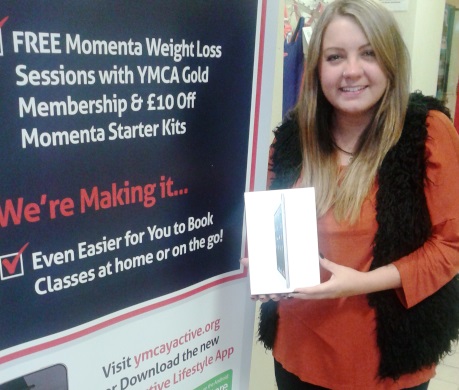 Fiona’s daughter Brogan collecting the iPad Mini on her behalf.

A YMCA member of 4 years, Fiona Fraser of Thornton Cleveleys was over the moon when she found out she was the winner of our iPad Mini!

Fiona was picked at random having entered our competition during the summer as part of the pre-launch campaign for YMCA’s new App and digital class bookings facilities.

Unfortunately Fiona could not attend to pick up her prize herself and daughter Brogan gladly accepted on her behalf.

Fiona suffers with Fibromyalgia. The condition is not very well known or understood. You can wake up one day and be fine and wake up the next day and be bound to your bed for the day. The day of the photo was such a day for Fiona.

She said: “I try hard to beat it and exercise really helps which is why I go to the gym at YMCA Fleetwood as much as I can. But some days I am in so much pain and horrendously fatigued I just can’t do anything.”

According to the NHS Choices website Fibromyalgia, also called fibromyalgia syndrome (FMS), is a long-term condition that causes pain all over the body. Other symptoms may also include:

Exact causes of fibromyalgia are unknown, but could be related to abnormal levels of certain chemicals in the brain and changes in the way the central nervous system (brain, spinal cord and nerves) processes pain messages carried around the body.

The upsetting thing for Fiona is the effect she feels her condition has on the family. Due to the unpredictable nature of FMS it can take its toll in other ways. Fiona’s situation is compounded by the development of bouts of depression. “I don’t use the gym like most people. I use it to try and balance my severe depression alongside the fibro. And it works for me.”

She added: “I’m now a shy and quiet person, but I know when I go into the centre I’ll see friendly faces, especially Kat whose bubbly and happy personality is contagious and puts a smile on my face… and that helps me tremendously.”

For more information about Fibromyalgia or to find support groups visit http://www.fibroaction.org/